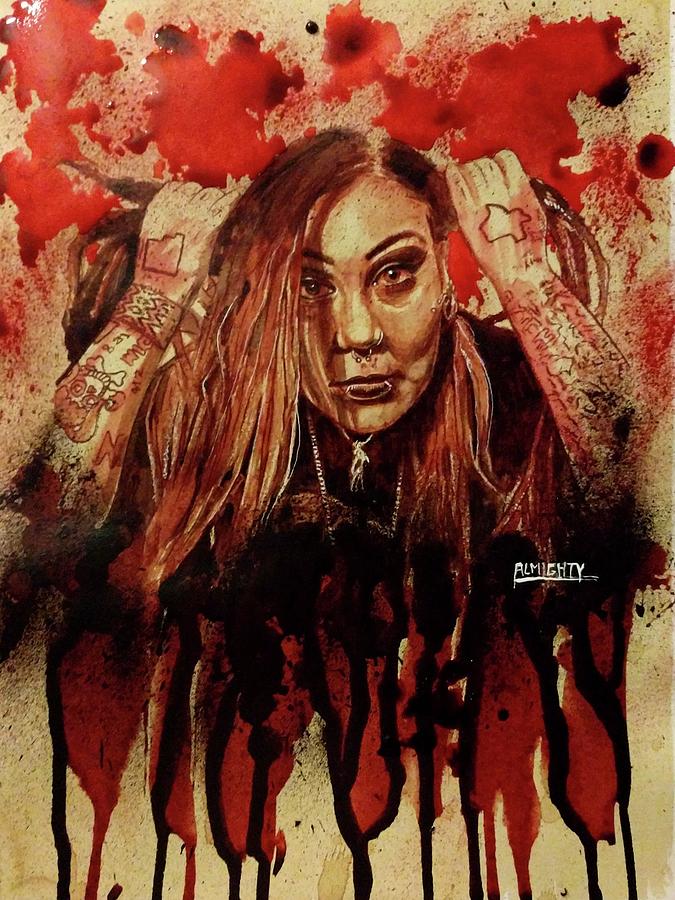 Portrait of Razakel done in her blood..

Female artists in the horrorcore genre are looked upon as jokes and fakes, and it is said a female cannot be as lyricly extreme as a man, Razakel has proven this wrong time and time again. In January one year ago, a bomb would be dropped on the underground and has continued to spread like a wave of death since. Razakel first picked up the mic in January 2006 and has developed a very strong and loyal underground following as the Queen of the Wicked Shit. Early in 2006 Razakel got involved with other underground artists and got "signed" to a label that has since folded. In mid 2006 Razakel was contacted by Serial Killin Records for a possible contract, a demo was exchanged and a meeting arranged. August 11th 2006 it was made official, Razakel was signed to Serial Killin Records and talks of a album begain. Produced by SickTanicK Tha Souless, Razakel released tracks like "My Way", "In My Hands", and "The Spot", quickly becoming underground and fan favorites. The Wicked Bxtch Of The Southwest had been reborn into a whole new world. Later Performing live with artists like Insane Poetry, Bloodshot, Scum and many others, she has proven she is a force to be reckoned with in the underground irrigardless of gender. Razakel begain work on her longly anticipated first album "Murder Potion" to be released under Serial Killin Records, and as now in the final stages of production, Produced by SickTanicK Tha Souless and featuring fellow label mates, Two Clipz, and SickTanicK Tha Souless, Murder Potion promises to be nothing but the purest of the Wicked Shit while at the same time you get a look into the dark mind of Razakel. Murder Potion is due out April 23rd on Serial Killin Records. Within one year of picking up the mic Razakel has grown in popularity and has held her crown and throne of Queen of the Wicked Shit, Only time will tell what the future holds for Razakel, but it promises to be one full of the wicked blasphemy the underground knows and loves.Its now 2008, the "Murder Potion" EP dropped with great success selling out the first run in 6 days, a repress was issued a time later, also sellingvery quickly. Razakel now begains work on her longly anticipated "Madness & Dispair" LP due out in june of 2008this album gives a more synical and hands on look at the charicter of "Razakel" a much more personal, and dark lookinto the mind of the most violent and blasphemous female to ever pick up the microphone cuh

All paintings are done using human blood as a medium. The originals can be found in various museums such as Zac Baggins Haunted Museum in Las Vegas and the Poe Museum in Richmond VA.,As well as notable private collections and Odditoriums all over the world... The art is most defiantly appreciated by those with an unusual pallet..