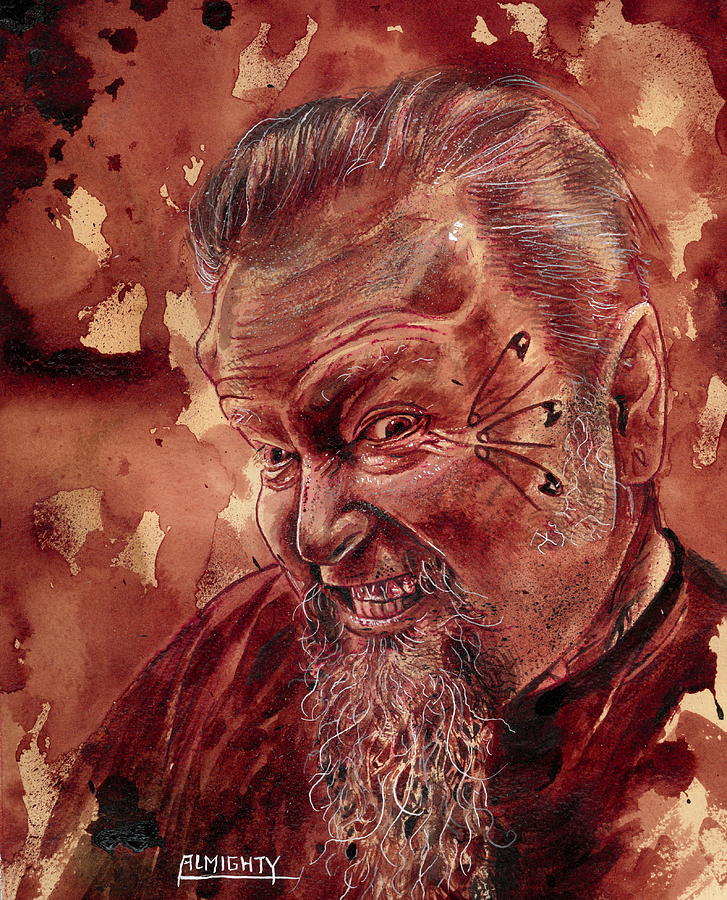 LET IT BLEED
by Ronnie Would
All too rarely these days something or someone will manifest itself into the landscape of your mind and reside there until you decide which compartment its going to live in permanently because its definitely something you don’t want to leave. Even more rarely you may come upon two such talismans that will in the time some how become one. This seems to be the case with artist Ryan Almighty. Upon first meeting with him you may believe you met someone escaped from Dante's Inferno, with his modded horns and split tongue as he speaks its not hard to keep a watchful eye upon his own tattooed eye which he makes perfect contact to you as he speaks. In conversation you will learn of his vast knowledge of music and his days as front man in the punk rock group Viktor 44 and the Act Outs and if this wasn’t enough to hold your interest you find yourself deeper into his soul, which he wears on his sleeve, about his romance and growing collection of macabre oddities, which even landed him a spot on the show “Oddities” featuring one of his possessed dolls. Somehow the conversation takes another turn to his body art photos of various tattoos he has graced peoples’ skin with. His shadowy images and eye for the smallest detail has earned him the title of one of the most original skin artists on the east coast. Owner of Almighty Studios, Ryan has a steady and faithful line of clients waiting to have his work cast upon them for a proud display. And as if this wasn’t enough to keep you entranced by his magnetic aura you find yourself emerged into a whole new conversation about art and the macabre. Ryan has most recently begun focusing on doing watercolor style paintings using human blood. Authentic human blood he collects from donors or people who commission him to do a piece for them with something beyond a tribal value to them. He mixes the blood with a secret touch to create a medium very seldom, if ever, seen. Using everything from pop art images like“My Little Pony” and “The Stones Tongue” or Warhol’s Campbell’s Soup Can to the portraits of serial killers and old girlfriends are some of his muses. One of the most recent paintings I’ve seen was a portrait of Dana Duffy Freemon,singer from the infamous Demonic Christ, Mythic and Satania, black metal bands that looks so alive it reminded me of the story of native Americans being afraid their soul would be captured if photographed. That’s what he does; he captures your aura in a swirl of your own blood that would make a photo blush.Ryan has recently taken his art style to the west coast where he has quickly become noted for his class and ability by doing guest appearances at several shops. One of these shops, Tiger’s Blood Social Club, owned by lead singer of Fang, Sam McBride and artist extraordinaire Joe Foster not only welcomed him but had several pieces commissioned through the shop, one being of Sam himself,another masterpiece-whose original frames are almost always handmade from various human and animal bones or something he sees useful to get the paintings to breathe. Let there be no doubt that Ryan is one eccentric artist by definition if there ever was one. The fact that he wears it on his sleeve makes him accessible and his humbleness makes you want him to do something to your body. I am watching in real time as he becomes larger than all his sums and shrugs it off, refusing to become a cliché.